Everyone, in Embedded Electronics domain today, must be familiar with a unique development board among us, called the Raspberry Pi, which is a credit-card-sized single-board computer developed in the UK by the Raspberry Pi Foundation.The Raspberry Pi has a Broadcom BCM2835 system on a chip (SoC),which includes an ARM1176JZF-S 700 MHz processor (The firmware includes a number of "Turbo" modes so that the user can attempt overclocking, up to 1 GHz, without affecting the warranty), VideoCore IV GPU and was originally shipped with 256 megabytes of RAM, later upgraded to 512 MB.It does not include a built-in hard disk or solid-state drive, but uses an SD card for booting and long-term storage. 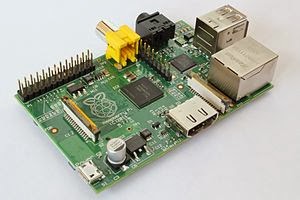 The Raspberry Pi,Model-B Rev 1, i am using is running on Debian flavor of Linux, called the "Wheezy"(Wonder, if it was having a running nose).To access, the signals on the Board, i have used the Expansion Pins exposed on the Board, as shown by the location on the Board of the major ICs, connectors and headers, respectively.


I am communicating with the Raspberry Pi using the serial console terminal via a USB2RS232 Adapter that one can easily get as a variety of adapters available in the Market. However, there was a problem that i had faced initially, since the UART Signals of Rx and Tx,(Pin nos. 10 and 8,exposed on the Top side Expansion Header, as shown in the fig.)of Expansion Header were of TTL
nature and hence required a conversion TTL Voltage levels to RS232.

Upon, this end i tapped in the UART RxD and TxD to a TTL to RS232 converter circuit board, that i had assembled upon.
Now, this RS232 Output of the board could be fed via a USB2RS232 Adapter to my Laptop and i could communicate with a serial console terminal program like Putty, TeraTerm or Minicom, which i am using on my Ubuntu machine. And, Viola it worked !


Here, are below snaps of how i communicate with my Raspberry Pi, via Serial Console Terminal,or via the board shell on my Laptop. 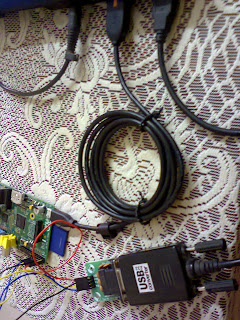 So, this is all about the initial setup. To, begin with, the purpose of this small project is to show how a Simple Character Device Driver can be cross compiled for Raspberry Pi and inserted in the form of a Kernel Module with the installed Kernel. An Interrupt will also be requested and registered with the Kernel at the time of installing the Device Driver as a Kernel Module. Now, firstly, we would need a Kernel source, which must have the same version as that of the Kernel of my currently running Raspberry Pi.

So, we have our Kernel Source against which the module can be built against,as we will see shortly. Now, firstly, the Kernel has to be cross-compiled, since i am trying to compile it on my x86 machine, with Ubuntu installed, and the target is ARM Based, Raspberry Pi.

After this, now we begin the Kernel cross-compilation.

After, this we begin writing the Character Device Driver, which can be built as a module to the above cross compiled RPI Kernel. One, of the first things is to assign a MAJOR and MINOR number to our Character Device Driver. One of the basic features of the Linux kernel is that it abstracts the handling of devices. All hardware devices look like regular files in Linux.
Char devices are accessed through names in the filesystem. Those names are called special files or device files or simply nodes of the filesystem tree; they are conventionally located in the /dev directory. Special files for char drivers are identified by a "c" in the first column of the output of ls -l. Block devices appear in /dev as well, but they are identified by a "b.

If you issue the ls -l command, you'll see two numbers (separated by a comma) in the device file entries before the date of the last modification, where the file length normally appears. These numbers are the major and minor device number for the particular device. The following listing shows a few devices as they appear on a typical system. Their major numbers are 1, 4, 7, and 10, while the minors are 1, 3, 5, 64, 65, and 129.

We will use the following numbers as MAJOR and MINOR number for my character device driver:
#define MY_MAJOR 89
#define MY_MINOR 0

Next, we define the module author and module description for the same:
MODULE_LICENSE("GPL");
MODULE_AUTHOR("RBiswasx");
MODULE_DESCRIPTION("A Simple Character Device Driver module");


Adding a driver to your system means registering it with the kernel. You can do this by using 'register_chrdev' function, defined in 'linux/fs.h'.

In my code, i have used the following way to register my character device driver, using 'register_chrdev_region',it is something you should do to avoid conflict with other device drivers which may have played by the rules and been allocated the numbers you're trying to use.

After, registering the character device driver using the above kernel functions,in the 'init_module()', i am trying to map the GPIO Base Address of Raspberry Pi using 'ioremap' function call. The purpose of doing this is, since GPIO Registers are Memory-Mapped in ARM Platform,and not I/O Mapped like in x86,hence to read, or use the GPIO Pins(as INPUT or OUTPUT) exposed on the Expansion Header of Raspberry Pi Board, we have to map these physical addresses using 'ioremap'. This 'GPIO_BASE', address i have defined in the header file 'RPI.h'.

These addresses,i have found from the BroadCom BCM2835, the SOC present in Raspberry Pi, manual. BCM2835-ARM-Peripherals.pdf
In page no. 6 of the following manual, it says,

Now, in the same manual at page 90,the virtual address for GPIO Base is 0x7E200000. This means that the offset to the physical address will be 0x200000 which explains the GPIO_BASE.


Next,we define a struct of the type bcm2835_peripheral, which will contain the information about the location of the registers in our header file 'RPI.h'.

Now,we will be able to use the memory-mapped 'gpio.addr' register to configure the GPIO Pins as Input or Output. For this i have used few macros in 'RPI.h' header file as follows:

On referring to BCM2835 Manual,page 90,we see that there are 5 register banks of 32-bit each, with each register bank mapped mapped to 10 GPIO Pins.

Hence, that was the explanation about how we are going to set any GPIO as INPUT/OUTPUT and READ/WRITE to it. In the 'init_module()', i have used Pin 4 and 24 as OUTPUT.

Next, in the 'init_module()',we do the most interesting part which is to request an interrupt from the Kernel and associate it with any GPIO Pin. This is done in the following function call:

In,the following function,'r_int_config()'we are firstly requesting GPIO which if successful will allow us to use the GPIO Pin, if it is available and not being currently used for some other purpose.

Next,we map this GPIO to any Interrupt using 'gpio_to_irq' function which will map this GPIO Pin to an interrupt number,as decided by the Kernel, based on the availability of the interrupt.

So,now we have an irq number, which is associated with the GPIO. The definition of this function, 'gpio_to_irq' can be found inside 'linux-rpi-3.6.y/arch/arm/mach-bcm2708/include/mach', since BCM2708 is the family to which the SOC of Raspberry Pi, BCM2835 belongs to:
The function 'gpio_to_irq',returns 'GPIO_IRQ_START+gpio', now for BCM2708 platform,the value of 'GPIO_IRQ_START' is defined in 'irqs.h' file as:

The following snapshot illustrates the relationship more appropriately:
After,we map this GPIO to any Interrupt using 'gpio_to_irq' function,we request for an irq,using 'request_irq' function, as shown below:


So, this was all about initializing the character device driver, in 'init_module'.

And,finally we release the interrupt also

In the function, 'r_int_release()'we free the irq


Next,we see the fops functions one by one,to begin with 'my_open(struct inode *inod, struct file *fil)'.Here, nothing much is done,except reading the Major and Minor Number of the character driver.Further,code can be added to increase the count of the Module,if more than one user space program is trying to access it.

The 'buff' is the character pointer to the string from the user space and 'len' is the string length,and this string is copied to the kernel space array,'msg'.


Next,we see the fops function, 'my_close(struct inode *inod, struct file *fil)'.Here, nothing much is done,except reading the Major and Minor Number of the character driver.Further,code can be added to decrease the count of the Module,if more than one user space program is trying to access it.

Inside the Interrupt Handler: r_irq_handler()

After,this we check the status of the GPIO Pin 23,which we have set as INPUT,which gets a Timer signal from my interrupt source,after every 13 seconds,based on which GPIO Pin 4 will be SET or CLEARed.

This GPIO Pin 4 is controlling the Green LED on the Bread Board.

Finally,in the interrupt handler,we restore the local interrupts and return.

Interrupt Handlers run asynchronously and thus interrupt other potentially important code,including other interrupt handlers.Therefore,to avoid stalling the interrupted code for too long,interrupt handlers need to run as quickly as possible.

Since, Interrupt Handlers do not run in process context,therefore they cannot block.Due,to these requirements,we need a way to defer the more critical part of Interrupt Handler using a mechanism called Bottom Half Processing.

Tasklets are a bottom-half mechanism built on top of softirqs.As, already mentioned,they have nothing to do with tasks. Tasklets are similar in nature and work in a similar manner to softirqs; however,they have a simpler interface and relaxed locking rules.

Softirqs are required only for very high-frequency and highly threaded use.Because Tasklets are implemented on top of Softirqs, they are Softirqs. Unlike,Softirqs,two of the same Tasklets can never run concurrently on a Multi-Processor core system,although two different Tasklets can run at the same time on two different Processors,say one on ARM and another on X86 core. This is one major difference between Tasklets and SoftIRQs.

I have uploaded the Module Code covering new implementation using TASKLETS in the Resources section of the Blog.One can download the same and verify it.

The Makefile for the module is pretty simple,but important without which you won't be able to generate the '.ko',kernel object for the Module.

The Makefile looks as follows:


In the User Space Program: Test.c


The,User Space Program is compiled on the Raspberry Pi,using 'gcc'.


The entire Device Driver Project can be accessed and downloaded from here:

NOTE: I am editing this Section here...

The Entire Kernel Sources that i had used is shared publicly and uploaded in the Google Drive. Below is the Link:

Also the Cross-Compile Toolchain for building the Kernel Sources, that I had used can be downloaded from the below link:


Furthermore,i have made and posted the Video of my Project on U-Tube,the link to which is as follows: